Truman Wilson was only 11 when he launched Truman Factory candy after seeing a kid pitch on "Shark Tank."  Now he's 16 with an e-commerce site, a new product line, and a lure aimed at gamers everywhere—a golden ticket packed in each candy could win them $500 in Dogecoin, a Yeezy Gap jacket, a Corsair gaming headset, or other meme-friendly prizes. 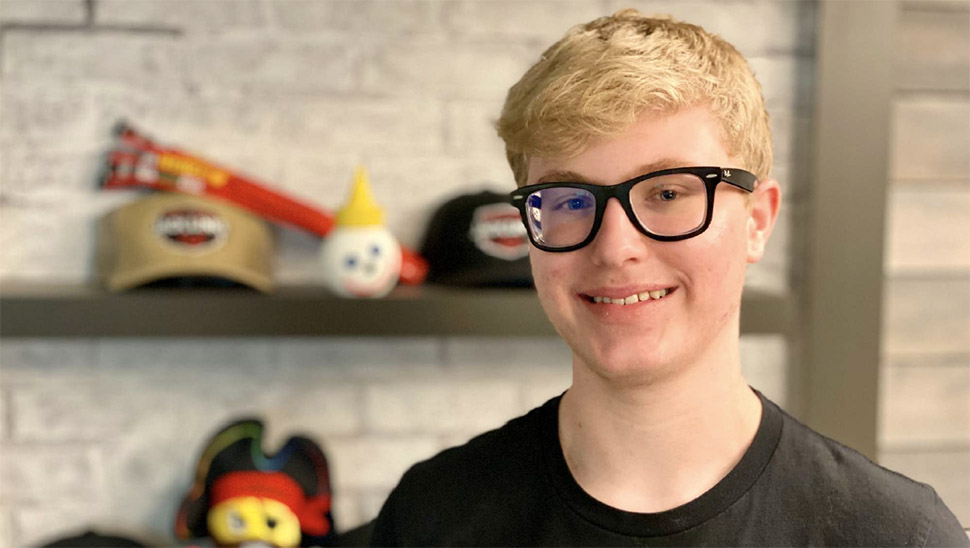 When most 11-year-olds start a business, they make lemonade and walk to the curb. Not Truman Wilson. In 2016 he was lying on the couch watching “Shark Tank” with his family, and saw a kid pitch a product to Mark Cuban. Amazed that kids could own a business, he got off the couch—and became a businessman.

Truman walked into his father’s office and found him on his computer. “I said hey, can we start a business?” Truman says.

He already had an idea.

“‘Charlie and the Chocolate Factory’ was my favorite movie, and I love chocolate and candy in general,” he told Dallas Innovates. He remembered the magic of the golden tickets, and thought why not update it for his generation?

“I wanted to incorporate those two things,” he said, “because what kids don’t like winning prizes?”

Truman wasn’t pitching just any dad. His father is Derek Wilson, who at the time was founding partner of Manhattan Pacific Partners, a Dallas-based investment and consulting group. Derek knew his son well enough to take him seriously, and encouraged his dream.

By 2019, Truman had a fledgling business selling chocolate Truman Bars in local Dallas stores like the Royal Blue Grocery in Highland Park Village. Kids tore open the wrapper to find a golden ticket with a chance to earn prizes from the “Epic Prize Vault”—gaming consoles, movie passes, tickets to a Mavericks game and more. Truman’s father Derek had become the company’s CEO.

Truman wanted to do social good with his business, not just make profits. So from the beginning he donated a portion of all his Truman Bar sales to Vogel Alcove, a Dallas charity that helps homeless children with therapeutic early childhood and school-aged programs, family support, and physical/mental health services. Vogel Alcove recognized Truman with a Kids Helping Kids award at their 2018 annual gala.

Carrying boxes of chocolate bars sourced from Nassau Candy in Hicksville, New York, Truman went from store to store, trying to get his product on the shelf.

“We used to go to stores, ask for the manager, and then sell to them right there,” Truman recalls. “It was basically a 100 percent success rate, because they would always say yes.”

Things began clicking: Truman Bar sales expanded from store to store, getting into 90 Dallas-area locations by the end of 2019. Truman Factory celebrated its official second anniversary with a pop-up storefront in Highland Park Village Shopping Center. It started an Amazon store and packaged Truman Bar Fun Packs to sell online.

The startup created co-branded Truman Bars by doing a wrapper collaboration with WeWork—selling the bars in nine cities in five states, Truman’s first foray outside Texas.

Truman was recognized by the Dallas County Commissioners Court as an entrepreneur supporting Vogel Alcove and youth business.

Then came the pandemic of 2020—and everything shut down.

Rebranding as “candy for gamers”

“We used that time period to totally redo the business,” Derek Wilson said. Working with Skyler Johnson, founder of the creative agency Paper Crowns, “we completely changed all the branding, all the products, and the software for the prizes.” They expanded their product line beyond chocolate bars to include Worms and Drops gummies made for them by VIRC, a candy company in San Antonio.

Another big change: the target customer.

“We want to be the candy for gamers,” said Truman, who’s now a 16-year-old student at Highland Park High School.

Gaming is right in Truman’s wheelhouse (his gamer nickname is Random). And it was in Skyler Johnson’s too—in 2007 he founded the Dallas-based global esports franchise Team Envy.

Truman Factory now has an e-commerce site designed to make gamers salivate, with a regularly updated list of prizes for the TikTok zeitgeist.

“Our Prize Vault is marketed toward gamers,” Truman said, pointing us to the current lineup on his site: $500 worth of Dogecoin, a Yeezy X Gap Round Jacket, an Oculus Quest 2, Apple Airtags, a Corsair Virtuoso gaming headset, and more.

“Popping up” at gamer events

Truman Factory will relaunch for the gamer and esports markets by “popping up” around the country at gamer events, tournaments, and conferences. While still selling candy at select stores in Dallas and nearby suburbs (they have someone helping them get into more businesses), they think gamers are their “golden ticket” to breaking out nationwide.

With his chocolate bars already helping Vogel Alcove, Truman  found a second charity for his new candy products aimed at kids and teens—Friends of the Children, which provides paid mentors to kids from age four to 12th grade to help them achieve their goals. The organization has 22 locations in 13 states and 450 schools. A portion of all Truman Factory bagged candy sales goes to help provide mentors for young people who need it most.

Now incubating at Team Envy, Truman Factory is keeping an eye on memes and updating its software to change prizes “on the fly,” based on what’s trending on TikTok and what gamers are into next.

So will something different be churning out of Truman Factory soon?

“Well, the concept of the Truman Factory in the beginning was that we can make anything, because it’s a ‘factory,’ right?”  Derek said. But for now he and Truman are keeping their eyes on the prize of their candy brand.

The startup is exploring expanding beyond local Dallas-area stores and into movie theater chains and other niche markets. If you want to find their candy near you, Truman Factory has a search engine that will help you find its treats.

Now excuse me while I rip open my Worms bag and try to win that Yeezy Round Jacket. I’m feeling lucky today.

This story was updated July 1, 2021, at 10 a.m. with additional details about Truman Factory’s early years and philanthropic efforts.