Reasoning Mind: Online Math Class a Plus for Kids

Yesenia Avila can tackle a math problem in a matter of seconds.

When, “23 + 6,” flashes across her tablet, she records the sum without any hesitation.

“I can sit and do math in my head,” says the 8-year-old proudly.

Adding and subtracting are important concepts for students to master in second grade, especially when it involves two- and three-digit numbers, said Yesenia’s teacher, Sarah Sullivan.

“They have to know adding and subtracting ends and outs by third grade because in third grade they’ll start multiplication and division,” Sullivan said.

“My students in second grade — 7- and 8-year-olds — solve for x, which is something when I was in school that I was doing in seventh grade.” Sarah Sullivan.

Sullivan’s students at the private Momentous School in Oak Cliff use an online program called Reasoning Mind to supplement her math instruction.

Two hours a week, Yesenia and her peers scatter about the classroom with computers to work through lessons at their own pace. Sullivan can check their progress through data funneled to her computer and pull aside students who might need extra instruction on particular concepts.

The online math programs developed by the Houston-based nonprofit are designed to give students the foundation needed to be successful in algebra beginning with second grade and following up through seventh.

“My students in second grade — 7- and 8-year-olds — solve for x, which is something when I was in school that I was doing in seventh grade,” Sullivan said.

In May 2015, Reasoning Mind won the Deloitte RightStep Innovation Prize, which included a $100,000 cash award and $100,000 more in pro bono services from Deloitte.

The nonprofit received a $100,000 grant from Dallas-based The Meadows Foundation in April to develop an early learning curriculum, which it plans to pilot next school year.

By 2018, the nonprofit hopes to add Pre-Kindergarten through first grade, and an eighth grade curriculum to round out its offerings.

After immigrating to the United States from the Soviet Union in 1990, Alex and Julia Khachatryan, who had math and science backgrounds, were dissatisfied with their son’s math education.

“They found that George, even though he was getting As in math, had some pretty serious gaps in his knowledge and he wasn’t very interested in it,” Reasoning Mind spokesperson Derek Hopf said. “To them, a family with this really strong math pedigree, that was really upsetting.”

In 2000, they founded Reasoning Mind, along with their son, George, to offer students a math education based on curriculum and practices from countries such as Russia and Singapore, which have high math performance rates. They first implemented the programs in schools in 2005.

“A lot of ed-tech products are superficial in the sense that they are game-based or problem/practice over and over … None of those things are bad, but if that’s all you focus on, you’re not really replicating what a quality math class is,” Hopf said. 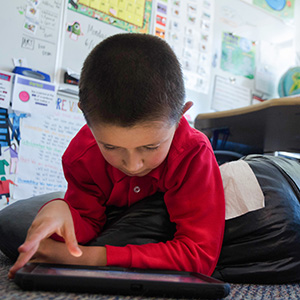 Ramses Holland focuses on a math problem while using the Reasoning Mind math program on his tablet. Photo by Hannah Ridings.

If students begin struggling, the Reasoning Mind Foundations program for grades 2-5, will revert back to prerequisite lessons to make sure they understand the concept before moving forward. For those students that have mastered the material, they will automatically be challenged with more intense problems.

There is a gamification component. As students answer questions correctly, they receive points that can be redeemed for virtual goods in the program’s shopping mall.

“I can get the pogocow! That’s my last one!” said Momentous second-grader Rene Miranda to nearby classmates.

Rene, who is already starting on third grade curriculum, had 24,214 points on a recent afternoon. He enjoys filling his virtual room with the goods he buys in the program but said he also likes learning about math as well.

“It has a lot of fun things like the puzzles,” Rene said of the program.

Sandy Nobles, director of education and principal for the Momentous School, said the program changes the pace of a math class for the better.

“It’s individualized so that the teacher is personalizing that learning for that child,” Nobles said.

Currently, Reasoning Mind serves more than 125,000 students across 12 states. North Texas is its largest region with more than 37,000 students, most of which come from its partnership with Dallas ISD.

“It’s individualized so that the teacher is personalizing that learning for that child.” – Sandy Nobles

“The implementation coordinators from Reasoning Mind, they work with the teacher to make sure that it’s not something in addition to, but something that can easily be integrated in the classroom,” Sanchez said.

Following the 2011-2012 school year, when the program first went districtwide for DISD second graders, The Dallas Morning News reported that a DISD analysis concluded Reasoning Mind to be “costly and ineffective.” The district later denounced the study and continued its partnership with the nonprofit.

Sanchez wasn’t in charge of math curriculum at the time, but said based on a non-randomized study of the 2014-2015 school year performed by DISD’s department of evaluation and assessment, the program is making a positive impact.

“I’m going to default to the surveys and the teachers and administrators say they generally believe that it does make a difference. I have to go by that data,” Sanchez said. 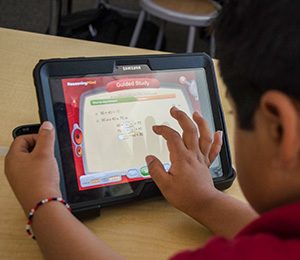 Students who spent at least 75 percent of the targeted time outperformed students who used it less on the Iowa Assessment and STAAR, according to the study.

“One of the key hurdles was technology and that’s probably the reason why implementation wasn’t uniform,” Sanchez said.

To address this, Sanchez said he has been working more closely with the district’s IT department. The district has also been working to dole out 7,700 new computers to campuses.

Nobles said she believes the impact of the program has translated to success beyond students’ years at Momentous.

“I know that for our former students that come back, middle school math isn’t that challenge for them … because they have that pre-algebra vocabulary [and] experience,” she said.

Education
Why Are There 750,000 Unfilled Job Openings in Cybersecurity? UNT Researchers Are Getting Up to $750K to Find Out

Related Articles
Why Are There 750,000 Unfilled Job Openings in Cybersecurity? UNT Researchers Are Getting Up to $750K to Find Out Is College Worth It? Emerging Research Focused on ROI Offers a ‘Resounding Yes,’ Economic Analyst Says The Last Word: UTD’s Balakrishnan Prabhakaran on Virtual Reality Tech for Phantom Limb Pain SMU Breaks Ground on $100M End Zone Complex at Gerald J. Ford Stadium Calendar: Not-to-Miss Events for Innovators in Dallas-Fort Worth
MORE►