Meet the Finalists: Startup Innovator of the Year 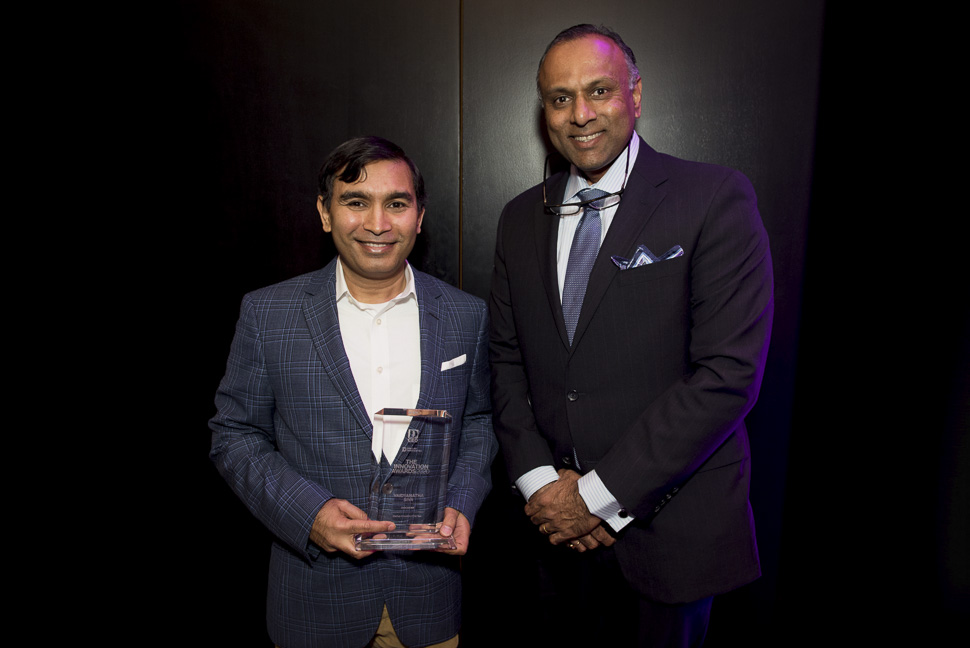 Here are the winners and finalists for Startup Innovator of the Year.

Four years ago, Vaidyanatha Siva decided to apply deep learning technology to healthcare. That idea led to DocSynk, a Dallas-based startup driven by “making healthcare better” through machine learning. Today, DocSynk’s artificial intelligence platform is being used by some of the largest players in the industry. The use cases are transformative, all designed around having a positive impact in healthcare. Using clinical informatics, recommender systems, and deep learning on data sets, the engine has the potential to detect a patient’s chronic condition, modernize a business process, or improve a care management process and revenue cycle. Siva and his team operate on the strategy of going deep before going wide, as DocSynk focuses on tuning the accuracy of its predictions. They believe the model could become the industry standard for patient risk stratification and cohort building. DocSynk was recently selected to participate in a federal AI healthcare challenge, a feat Siva hopes will help move the needle. From working as CTO at Infosys to CTO and COO at Parkland’s Innovation arm, and being instrumental in raising $50 million in funding for healthcare predictive analytics research, he is now focused on one thing: Building a “world-class technology unicorn in Dallas.” —Alex Edwards

Sean Minter’s AmplifAI is on its way to becoming one of the most impactful AI tech startups in the country. With AmplifAI, the days of hiring and training employees with the hope they’ll one day become high performers are gone. Using AI and machine learning, Minter, who’s also the CEO, is leading a team that helps enterprises (like Home Depot, Upwork, and Airbnb) enable employees to reach their full potential. A serial entrepreneur that’s successfully founded three other tech startups, Minter set out to solve this personnel problem after witnessing it firsthand. He thinks of each new startup as “an exercise in persistence and iteration as long as you have a problem that needs to be solved,” and considers the future to be a place of unlimited possibilities and challenges that can only be solved by individuals thinking beyond their limits. “All innovation solves a problem,” he says. “Creativity allows the innovator to look at the problem in a way that others have not, and develop a solution that generates value for both the customer and the innovator.” After self-funding for four years, Minter’s grown AmplifAI to become one of the largest VC-funded startups in the DFW area. —Alex Edwards

Bestow isn’t Melbourne O’Banion’s first rodeo. He had his first summer job at 13 years old, learning the value of a strong work ethic at a young age. That exposure to business gave him the confidence to become an entrepreneur, and he went on the build and grow previous companies before settling in as the CEO and co-founder of the first fully digital life insurance company, introducing to an antiquated industry a product that can be purchased in less than 5 minutes on a mobile device, without a medical exam. Praised by his team as a visionary on a mission to help as many people as possible, O’Banion is on a fast-tracked pursuit to build something that improves lives—a feat that he says makes everything “worth the effort.” Bestow is now on its way to total disruption: it’s expanded to 49 states, provided thousands with policies, and overall, built a better solution. “Innovation is harnessing an idea and executing a vision of progress and change,” he says. “True innovators carve a new path forward for the benefit of all future travelers. They must be confident enough in their mission to cast aside the critics and reform the status quo.” —Alex Edwards

Serial entrepreneur Dave Copps has been hailed by his peers as a beacon of innovation for Dallas. Anything Copps is known as an innovative, no-cookbook type of company. Dubbed a true innovator at-heart, Copps stands out among the tight-knit startup community for his proven track record as a successful founder, while at the same time shining for his drive to selflessly help and encourage like-minded individuals. Those close to him say he is best at building highly disruptive technology solutions and businesses. Copps founded Hypergiant Sensory Sciences with Chris Rohde, president, after the duo exited Brainspace for $2.8 billion to Cyxtera Corp. in 2017. And now Hypergiant Sensory Sciences, which uses spatial computing to bring the power of artificial intelligence to understanding sensory data, is quickly on its way to becoming a pioneer in a new industry. By combining AI and sensor networks (IoT) within a spatial model, HSS is providing organizations the ability to perceive, analyze, and understand their businesses in ways that haven’t yet been possible. In under a year, the startup moved quickly from Series A funding to staffing to product—some dubbed it one of the fastest-moving they’ve ever seen. It’s all done with Copps at the helm: he thinks bigger, takes substantial risks, and wholeheartedly helps benefit humanity and industry. —Alex Edwards

Perge and his team at FluidLytix have one major goal: to become a unicorn in three years or less. Its patented WAVE water efficiency valve features two-in-one tech that regulates both air and pressure, resulting in thirty percent lower water bills and 3-6 percent reduced water usage for businesses. It’s a $30 billion global market, but the journey hasn’t been easy. The opportunity of a patented water valve that compresses air from a company’s water line was plagued by a lack of market education, patent infringers, and rogue distributors. With Perge at the helm though, the sustainable solution is now dramatically impacting commercial, industrial, and government entities. Perge, who grew up in Yugoslavia, is extremely passionate about water scarcity and pollution, and his goal at the startup is to make that as important of a concept as energy efficiency. Fellow employees call him a competitive and strategic leader, using his previous life experiences as a soccer player and venture capitalist to lead the company. “Water scarcity and water pollution are a greater threat to humanity in the short term than climate change,” he says. “My prediction is that if we don’t massively deploy water-efficient technologies across the world in the next decade, humanity may face what I call ‘Watergeddon.’” —Alex Edwards

Click each link below to take a closer look at each finalist in all 14 categories.

CIO/CTO of the Year

Corporate Innovator of the Year

Startup Innovator of the Year

Innovation in Food and Beverage

Innovation in Manufacturing and Consumer Goods