The gloves will be off on August 11 when Digital Fight Club returns live to the Granada Theater during Dallas Startup Week. No, you won’t see tech innovators pounding each other to the canvas. Instead, 10 top DFW founders will spar 1-on-1 on controversial, disruptive digital technology topics—with a rowdy crowd of 500 tech movers and shakers cheering them on.

“We plan on breaking molds again,” said Michael Pratt, founder and host of Digital Fight Club since it launched 2016. “Panels are boring,”

The last in-person Digital Fight Club happened in February 2020, right before the pandemic shut the world down. After a virtual version last year, now it’s back in real life, promising to be bigger & badder than ever before. General admission is free for Dallas Startup Week attendees, but spots are going fast. You can register here. 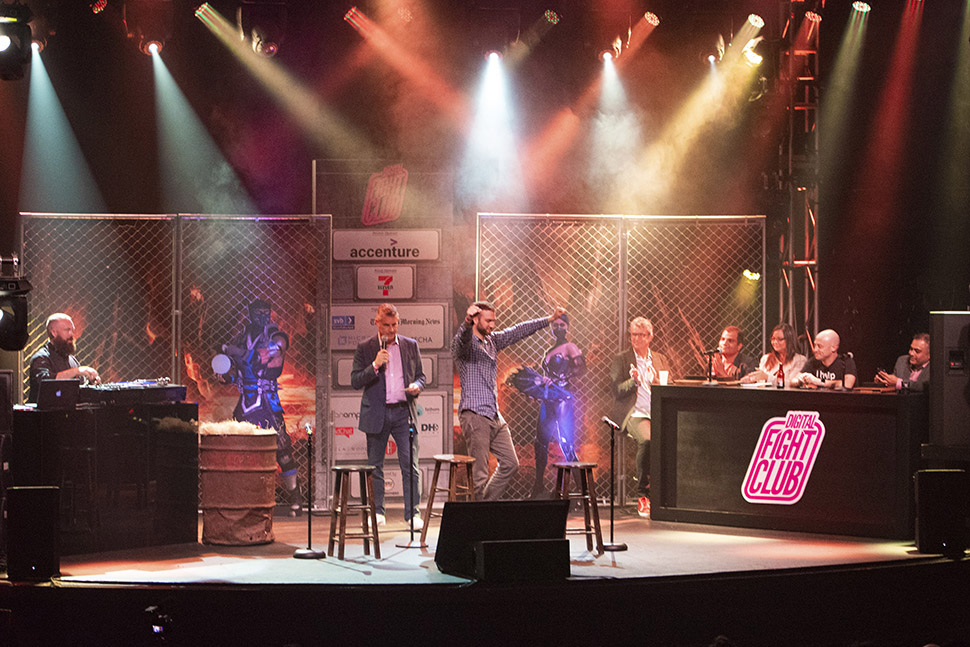 Like always, the goal is to rock the house. As you can see in the photo above from 2019, the fights themselves are colorfully staged and designed to spark drama. 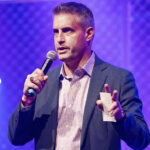 But first, starting at 6 p.m. on Thursday, August 11, the Granada’s doors will open for a general audience cocktail party with DJ Jason Esquire. Or you can “rub elbows with tech CEOs at the VIP reception” next door at Sundown at Granada, Pratt says. At these two parties, you’ll have the chance to fuel up for the night’s feistiness—a Fight Club tradition.

Next, you’ll watch a lineup of tech “referees” from some of DFW’s biggest companies overseeing five battles on red-hot topics. Before each “fight,” a sponsor will moon-walk their branded fight card across the stage.

The refs will get involved “to call BS on the fighters,” Pratt said. “This isn’t your father’s cushy conference panel.”

When the fights are done, it’s the crowd’s turn to weigh in as the refs and audience vote for a winner.

The metaverse isn’t just coming, it’s already disrupting—but where can it take us—and will we want to go? Two accomplished metaverse experts will duke it out on the future of a new way of learning, marketing, playing, and more:

STEMuli Founder and CEO Taylor Shead helped pioneer a game-based “educational metaverse” for students at Dallas Hybrid Prep, then launched it for a number of school districts across Texas. Now, after a $3.25 million seed funding round in May, she’s looking to expand nationwide.

Parachute Founder Jeff Kauffman was a former managing group head at The Richards Group before launching Parachute in 2021. His startup builds and invests in web3 solutions for the next-generation of marketing and advertising.

Transparency is one of the biggest buzzwords in marketing today. When brands let consumers behind the curtain, what should they reveal? Is honesty the best policy, and does it really make good business? Two brand experts will go toe-to-toe to fight for truth, rustic, and the openly capitalist way:

Holy Kombucha Co-Founder Theresa Pham is COO of her beverage line, whose motto is “Drink Well. Do Better.” She’s helped take their products from a small store in East Dallas to large national grocery chains including Whole Foods and Costco.

The Runway Co-Founder Cameron Gawley is chief growth officer of his newly launched online marketplace for modern consumers and brands. Previously, he made his mark in the Dallas agency world with his digital growth agency BuzzShift, his work as a contributing writer for the Forbes Agency Council, and more.

“Unless you’ve been living under a rock, you’re probably well aware that COVID threw the supply chain into utter chaos,” Founder and Host Pratt said. “Let’s watch two experts who both founded companies trying to tackle the issue duke it out”:

Truckl Founder and CEO Chris Hanebeck’s Dallas-based software company boldly claims to make the management and monitoring of freight “incredibly easy.” He serves on several advisory boards for supply chain, robotics, communication and financial service startups and is an advisor on supply chain, global trade and blockchain at the World Economic Forum.

Automatize Founder Brad Nichols launched his DFW-based supply chain optimization and automation platform in 2017, specializing in solutions for the oil and gas industry. Previously he was supply chain manager for FTS International and operations manager for Aaron Transfer and Storage.

Is going green just a shot in the climate-change dark, or a transformative practice that can help companies grow and prosper? A former White House wonk and a former F-18 pilot will go bare knuckles to see who’s greener, meaner, and more ahead of the curve:

Eden Green CEO Eddy Badrina honed his policy chops in the White House and Department of State before co-founding Dallas digital growth agency BuzzShift, then launching Eden Green Technology in 2019. Eden Green’s vertical farming tech stack is aimed at changing the way we farm our produce and feed our communities.

Clearyst Co-Founder and President Chris Robinson used to fly F-18 fighter planes for the Marine Corps, so he already knows how to fight. But now, after three years of M&A investment banking at Goldman Sachs, he’s championing all things green with Clearyst—a tech AI platform that aims to help businesses achieve their sustainability and ESG objectives.

When you click a link these days, you’re taking your life in your hands—or at least your bank account and the future of your business. From hackers to phishers to cyberthieves and ransomware hoods, endless black hats are weaving a truly dark Web. Meanwhile, we may be unwittingly selling our privacy with every app we download or site we visit. Two leading DFW cyber ninjas will punch above their weight to show us all the best way forward:

PrivacyChain President Andrew Hopkins runs a platform built to quickly and efficiently solve data management, monetization, and security challenges in which hundreds of millions are being invested. How? By storing each data record in its own data object, then writing that data object onto its own individual blockchain, stored in a “self aware” state.

The second cybersecurity ninja keeps things so secret, we’re still not sure who they are. Digital Fight Club will announce their identity soon.

Here are the local leaders who’ll be calling BS and keeping it real on the Granada stage during Digital Fight Club 2022:

Accenture is the anchor sponsor for this year’s Digital Fight Club. Other sponsors signed up so far include SVB, Altruas, and Improving.