Craig Lewis at the 2017 State of Entrepreneurship in Dallas. [Photo: Dallas Innovates]

The startup community is not just about any one group. It takes an entire ecosystem of stakeholders, said Trey Bowles, CEO and co-founder of The Dallas Entrepreneur Center.

“Whether you’re a CEO of a corporation or a barista at Starbucks, there’s something in the entrepreneurial and startup community here for you.”
TREY BOWLES

“Whether you’re a CEO of a corporation or a barista at Starbucks, there’s something in the entrepreneurial and startup community here for you,” he told attendees at the fourth annual State of Entrepreneurship Wednesday night at The Bomb Factory.

The area has seen startup exits from Brainspace, Ustream, Edition Collective, and many others including the recently announced acquisition of University Laundry by Procter & Gamble. Then there’s the significant funding rounds raised by startups such as StackPath, Panamplify, and Mizzen+Main. Bowles also noted Blackstone Charitable Foundation’s investment to the University of Texas at Dallas for a local post of worldwide entrepreneurship program Blackstone LaunchPad. The signature Dallas Startup Week event was all about celebrating the accomplishments of the area’s entrepreneurial community as Bowles gave highlights of major happenings within the last year.

#SOETX17 GALLERY: Click the image for a photo recap of the State of Entrepreneurship event.

DFW STARTUP EVANGELIST OF THE YEAR

New to the event this year was an award recognizing an individual’s support to the startup community. The inaugural “DFW Startup Evangelist of the Year” went to Michael Sitarzewski, who started Launch DFW, Ignite DFW, and Dallas New Tech, to name a few. Sitarzewski has been instrumental in Dallas Startup Week and many other aspects of the area’s startup community. 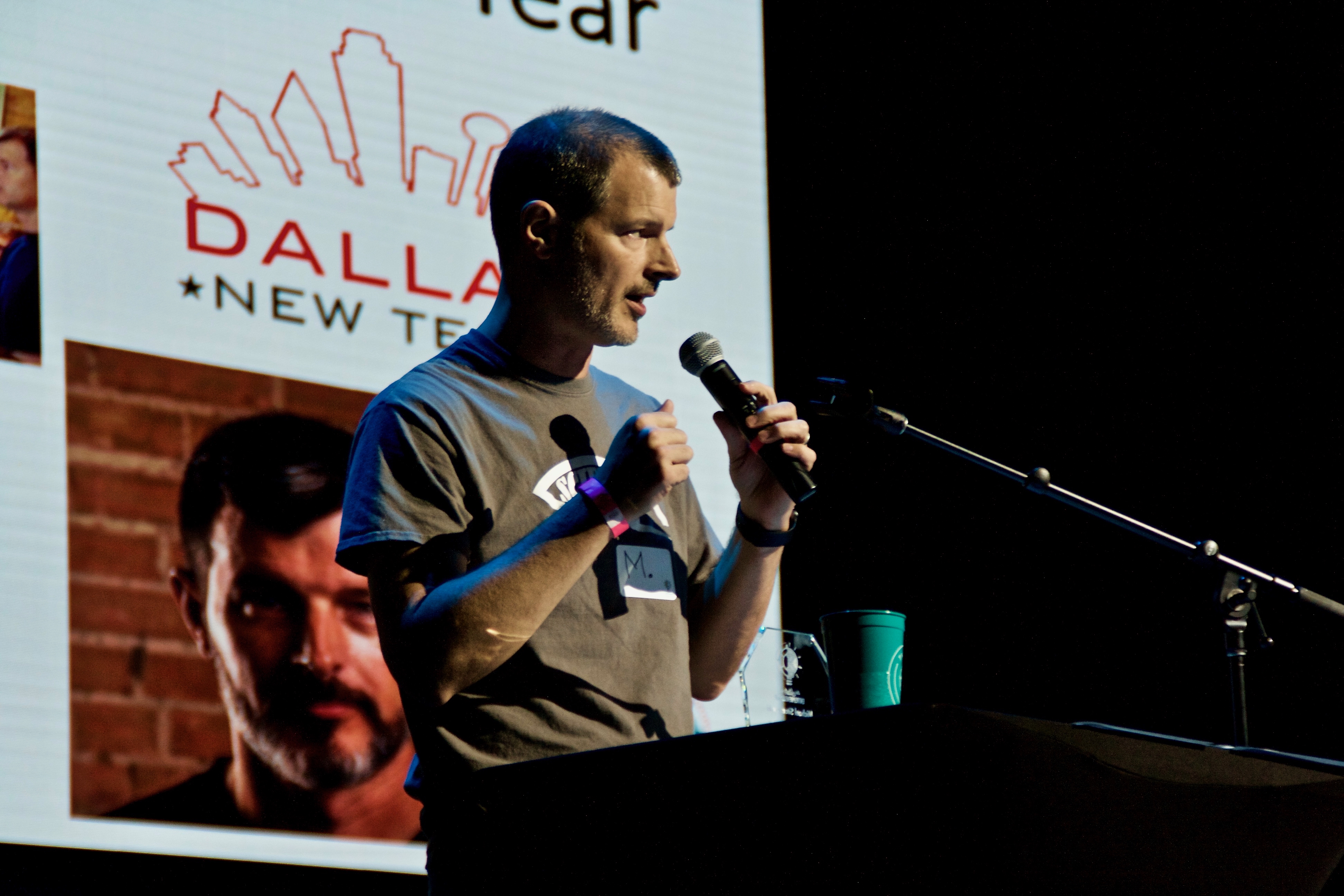 Michael Sitarzewski is awarded the DFW Startup Evangelist of the Year award.

COLLABORATION IS THE NEW COMPETITION

Bowles said the Dallas startup community is characterized by its collaboration and support. He equated the concept of entrepreneurship as being like standing on the edge of a cliff unsure of stepping into the unknown.

“The difference about the DFW area is that when you’re standing at that cliff and looking over the edge, we have thousands of people standing down in that abyss who are saying ‘go ahead and jump, we’ll catch you and help you out,’” Bowles said.

The Bomb Factory will be filled again tonight for United Way of Metropolitan Dallas’ “OneUp the Pitch,” where social entrepreneurs will present their solutions to community issues in front of celebrity judges such as former Dallas Police Chief David Brown and Dallas Mavericks player Harrison Barnes. There’s $100,000 on the line — $75,000 for the judges’ pick and $25,000 for the audience’s choice.

Friday may be the last day, but that doesn’t mean there’s any shortage of events.

The morning kicks off at 8:30 a.m. with “Legal Series Event: How to Go from Startup to Small Business,” featuring founding partner Samuel R. Smith of Dallas-based law firm Hamada Smith at Apple – Knox Street Boardroom, 3101 Knox St., in Dallas. Then, at 11 a.m. Joe Payton, 20-year real estate developer and founder of GeniusDen Business Incubator, will discuss the “The Future of Your Workspace,” at GeniusDen, 3106 Commerce St., in Dallas. Also tomorrow is the Real Estate Tech Startup Fair from 1 to 3 p.m. at Fort Work, 211 N. Ervay St. Suite 900, in Dallas. The week concludes with “State of Schools + Social Capital: A New Paradigm” 6 p.m. at Common Desk – Deep Ellum, 2919 Commerce St., in Dallas and of course the Chase Wrap-Up Party from 5 to 8 p.m. at Deep Ellum Brewing Company, 2823 St. Louis St., in Dallas.

It's a myth that you can't raise in Dallas these startups are proof @treybowles #SOETX17 pic.twitter.com/F0ycDk2Rla

Chopped it up with the Dallas Startup Week podcast last night at #SOETX17 #startup #tech pic.twitter.com/wNCN04sRRX

We had a great time at #SOEtx17 last night! Thanks for hosting, @theDECtx! We're excited about the state of #entrepreneurship in Dallas. pic.twitter.com/ZITX30aCm5

.@intriosity: Software is the force multiplier of the past. Automation #AI, analytics that of the future. #TechTrendsDallas #DSW17

Check out our day-by-day calendars.

Don’t forget to sign up for our newsletter and you’ll get daily coverage of DSW2017 delivered straight to your inbox.